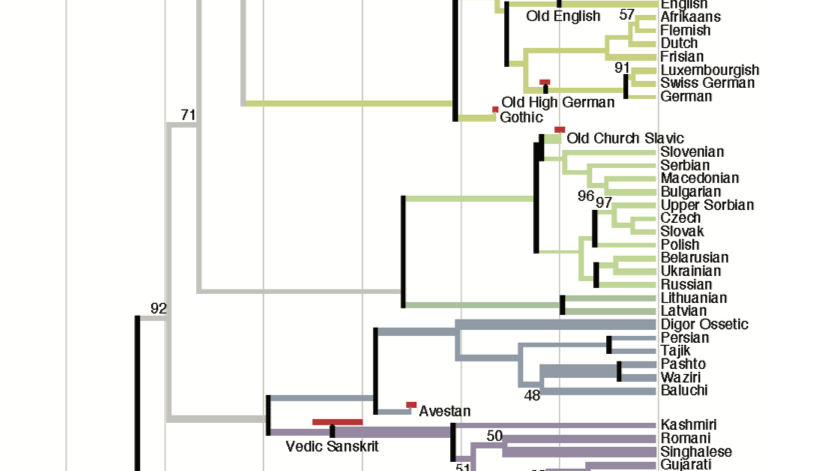 When I first taught my introductory course on historical linguistics in 2016, my student feedback suggested that I could make some improvements to its design. My goals with the course redesign were threefold: first, to update the course materials to include the latest in historical linguistics research. Second, to improve student mastery of the course material. Third, to attract more students to the study of linguistic history. With support from HumTech, OID, and EPIC, as well as some faculty colleagues, my 2018 version of the course achieved all of those goals.

Of the many changes that I made, I believe that two had the greatest impact on student learning. The first was the introduction of Plickers. In case you haven’t heard of Plickers, it’s a new student response system designed to increase class engagement, like iClicker or OPT. Unlike those, however, it is totally free for students and very easy for instructors to implement.

Plickers are essentially cards marked with a unique symbol on each edge. Instructors can present a multiple-choice question to the class and the students can answer by holding up one of the four edges of the card. Armed with the Plickers app on your smartphone, you can then scan the room to “read” your students’ choices. You can choose to collect data anonymously (that is, without recording what option each student selected), or you can assign each student a specific card. The latter seemed to me to invite too many practical complications (forgotten cards, lost cards, etc.), so I always surveyed the class anonymously.

I have to confess that I initially found the idea somewhat silly. Although part of me still feels that way, I acknowledge that there are advantages to using Plickers. The most important for me was that it offered me a way to see how much of the class was staying on top of the material. After introducing a new skill, I would use Plickers as a low-stakes way for the students to check their understanding. Over the course of the quarter, I learned that it was more informative to use baseline questions as opposed to more advanced questions. By the third week, I knew what proportion of the class could answer the really challenging questions; what I did not always know was how many students were getting the fundamentals. Plickers provided me with a way to quickly gather that data. When students were split (e.g., with substantial constituencies voting for two different answers), I could immediately go through the question in detail to clear up any misunderstanding.

Student response to Plickers was also more enthusiastic than I had anticipated! They seemed to enjoy both the experience of holding up cards to vote for an answer and the anticipation of the results.

The second change involved the design of my handouts. In the past, I wrote handouts with an eye to providing information that the textbook did not cover or did not cover in enough detail. I designed them in such a way that the new information could be easily digested through numbered examples (or so I thought).

Last spring, however, I tried something new. I gave my students handouts that contained a basic outline for the session’s material, along with questions and in-class exercises. In essence, I turned the handouts into mini-workbooks. The questions on the handout served as springboards for discussion. I now guided them through conversation to the information that I had previously written down for them.

The exercises on the handouts were another low-stakes way of showing them the sorts of problems that they would have to do on the problem sets and exams. Asking students to do them in class leveraged the pedagogical principle of “scaffolding,” that is, gradually removing support for students as they attempt to master skills. I heard from a number of students that the workbook-style handout kept them more engaged throughout the class, because they had to pay attention to fill in the missing pieces.

In summary, my course redesign was a major success. I was able to introduce more material to my students than in previous years, while simultaneously increasing both their mastery and their interest in the subject. I remain extremely grateful to all of the help that I received from my colleagues in Linguistics, HumTech, OID, and EPIC.