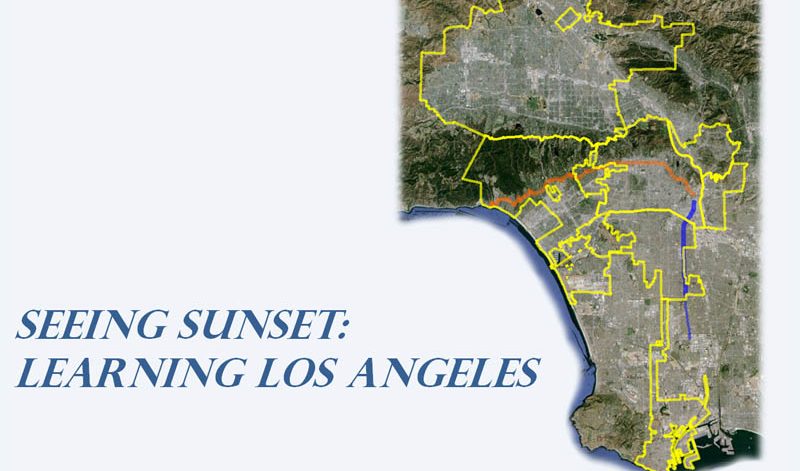 Learning Los Angeles is a joint project of the Los Angeles: The Cluster class and the UCLA Library to create an online textbook for that class. It is led by Prof. Jan Reiff and has been supported by the Office of Instructional Development, the Vice Chancellor forResearch and the University Library.

Since they began just over a decade ago, Freshman Cluster classes have emerged as a nationally celebrated part of the UCLA curriculum. Each is a year-long (3 quarter) interdisciplinary coursedesigned for first-year students. Three or four faculty from different disciplines along with teaching fellows from corresponding departments design a two-quarter lecture-based class followed by a range of spring quarter seminars in which students can pursue research on topics and methods explored in the previous two quarters. Los Angeles: The Cluster explores LosAngeles from a variety of perspectives. To date, instructors from history, art history, law,sociology, Chicana/o studies, English, urban planning and geography have led students throughthe city by way of different disciplinary paths. The course has also required the students toengage more directly with Los Angeles by riding the 2/302 Metro bus from UCLA’s campus tothe Pacific Ocean and from the campus to downtown Los Angeles. The idea of the textbook hadits origin as a guide to the communities and sites along that bus route that also tied whatstudents saw there to the readings and lectures about Los Angeles more generally.

Creating the textbook began in 2012 in a summer design studio led by Digital HumanitiesProfessors Johanna Drucker and Jan Reiff that brought together undergraduate and graduate DHstudents and graduate students as disciplinary researchers. Their efforts created historicaloverviews of the communities along Sunset Boulevard, a guidebook of sites visible from the busand located near the bus route, and an interactive map of those sites. These documents servedas a textbook for the class in Fall 2012 and Winter 2013. During Spring quarter, a student seminar evaluated how it had worked and developed their own research modules and pedagogical tools to make it better.

In 2013-2014, while the class was on hiatus, the University Library through its Center for PrimaryResearch and Training, Special Collections, and the Digital Library began transforming thosetexts and the student projects into an online publication even as it added – literally – over athousand primary sources from its collections and other tools to the online version. This springquarter, students from the cluster working with the library team are helping to craft thetextbook that will be available to students when the course is offered again as well as to thepublic. As they do, students are also adding Central Avenue to the site, perhaps requiring arenaming of the project to allow for that and other important arteries which will help theproject grow.