Skip to main content
Home > Past Projects > Diversifying the Classics 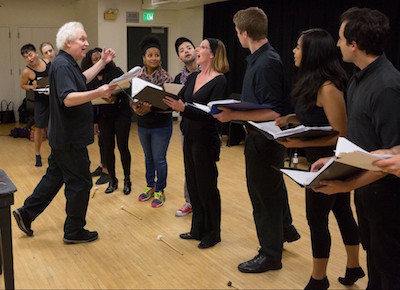 Diversifying the Classics is a project to bring the Comedias of the Hispanic Golden Age to modern audiences. As part of that, their Working Group on the Comedia in Translation and Performance has been preparing brand-new translations of these plays, to be published, along with the originals, in the Library of Translated Hispanic Classical Plays, a component of their website. This is a platform for scholars both inside and outside the UC system to provide digital peer review of those translations prior to their final publication.

HumTech has provided help visualizing and prototyping the interface for the Library of Translated Hispanic Classical Plays. The prototype uses Annotator.js to allow select individuals to offer highly granular comments on the draft translations, which can then be finalized and stored as TEI-XML in a digital repository. HumTech also provides web hosting for the project.

Image: Professor Michael Hackett and first-year students in the MFA Acting and Directing Programs, Department of Theater, UCLA School of Theater, Film and Television, in a staged reading of Lope de Vega’s A Wild Night in Toledo, translated by The Comedia in Translation and Performance working group directed by Barbara Fuchs. Photograph by Reed Hutchinson.